All too often, Traumatic Brain Injury (TBI) from contact sports and addiction to drugs or alcohol are interconnected. At Pure Sports Recovery, we understand these links and recognize that true healing can only begin when the individual diagnoses are identified and treated according to each client’s unique needs.

If you don’t Treat the Brain, the Cravings and Impulses won’t go away!

So it’s no surprise many athletes fail treatment multiple times.

Every year in the United States, 1.7 million people are victims of a traumatic brain injury, this includes many athletes. The Substance Abuse and Mental Health Services Administration (SAMHSA) reports that around 52,000 of those people will succumb to their injuries and die, while more than 250,000 will need hospitalization.

Data from SAMHSA suggests that around 80 percent of traumatic brain injury patients – around 1.4 million – do receive medical treatment before being released from emergency health services.

There are, however, hundreds, if not thousands, more brain injuries each year that go undiagnosed, some of these cases occur from participation in both amateur and professional sports, many victims fail to seek to medical attention because they are unaware that they suffered a traumatic brain injury.

Who Suffers From TBIs?

Many athletes receive concussions during their playing career due to repeated contact during sports-related activities. This in many cases begins in Junior high school and continues all the way up to the ranks of college and professional sports. Concussions can also result in Post Concussive Syndrome or a Traumatic Brain Injury. 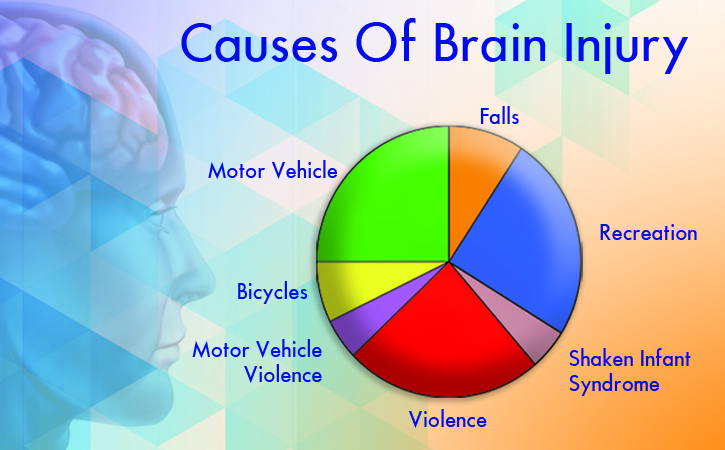 What is Traumatic Brain Injury?

Any time the head is suddenly or violently thrust out of it’s normal position, struck or penetrated by an object, or is hit with forceful pressure waves from a blast, there is a serious potential for a TBI or post concussive syndrome.

The following are some of the most common causes of brain injuries:

Substance abuse, especially in those that have developed a dependency or an addiction to drugs and alcohol, increases the chances of a traumatic brain injury.

It’s also quite common for athletes and others who have experienced multiple concussions to use alcohol and other substances as a coping mechanism to deal with the symptoms and side effects of the brain injury.

In fact, the most commonly misused substance that is linked to TBI is alcohol.

Long-term substance misuse is a major cause of continued brain Injury, and research has shown that drug and alcohol use increases in the period from 2 to 5 years after a brain injury.

Approximately three-quarters of TBI patients admitted to hospitals have a measurable amount of alcohol in their blood and around half of the people were intoxicated when the injury occurred.

Following a TBI, no amount of alcohol consumption is safe. However, those who had a substance use disorder before their TBI are at a greater risk of continued heavy drinking after their injury.

There is also the potential to develop a dependency or addiction to painkillers and stimulants, both of which are sometimes prescribed as a result of the TBI.

Some additional symptoms of TBI and substance abuse can include the following:

Whether a TBI is severe, moderate or mild, Pure Sports Recovery knows that our athletes who follow their individualized treatment plan can rewire and reconnect their brain back to more normal function, and live healthier overall lives.

On its own, the disease of addiction alters the brain’s natural chemical balance, making it harder for a person to self-regulate where it concerns particular habit-forming substances.

Post Concussive Syndrome and Traumatic brain injury only exacerbates this chemical imbalance because of damage to the pre-frontal cortex, which is the decision-making area of the brain.

Evaluation, Intervention, and Support are crucial for treating substance use addiction for people with a traumatic brain injury.

At Pure Sports Recovery, our athlete clients who suffer from traumatic brain injury and addiction are assessed with our Advanced Neuroscience Program, in order to measure the level of injury and the pace of progress during treatment.

We understand that addiction and brain injury can go hand in hand. Brain Injury increases impulsivity and cravings, because the decision-making part of the brain, the pre-frontal cortex is impaired.

Addiction changes the brain’s natural ability to self regulate and reorganize.

As the brain rewires itself and makes new connections, the behavioral symptoms and side effects of addiction and mental health issues such as depression, anxiety, and PTSD are improved remarkably.

By collecting data with highly specialized software that measures brain activity, Pure Sports Recovery examines the structure, function and physiology of the brain to create personalized protocols that restore the brain to normal functioning, even years after an injury occurs.

Some of the advanced tools we use include:

Call us toll-free at (800) 714-0340 to find out more about our Traumatic Brain Injury TBI and Addiction Treatment Program in southern California.